Piggotts in Peril, the sequel to the bestselling Piggott Place, begins with the shy and sensitive Bert Piggott accidentally finding the map to pirate treasure hidden many years ago by his great-great-great-great-grandfather. Little does he know that what lies ahead are problems that Bert could never imagine: the terror of turbulent seas aboard a 'borrowed' boat, capture by pirates, being marooned on the Isle of the Dead, and more.

Piggotts in Peril is a warm, adventure comedy about the origins of the universe, the fate of humankind — and pirate treasure. 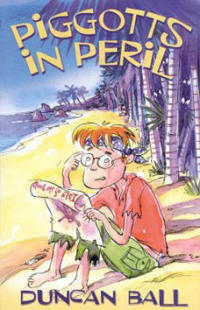