Selby is an amazing dog. He’s the only talking dog in Australia and, perhaps, the world! He can understand and speak people talk but is keeping it as secret in fear that his owners, Dr and Mrs Trifle, might put him to work. He’s also afraid that if his secret got out, he might be dog-napped, or just turned into a celebrity and never have any peace and quiet. Or he might be sent off to a laboratory to be asked silly questions by scientists. Selby is determined to keep his ability to talk a secret even if it kills him. And in many of the stories about him, it almost does. Selby rings Duncan up and tells him his unbelievable adventures and Duncan just writes them down. Nothing could be easier - or more fun.

WARNING Selby stories are highly addictive: read one and you may have to read them all!

Selby answers a few questions about himself.

Size: Not too big and not too small.

Colour: I'm not telling. (Allan Stomann, who does the pictures in my books makes me yellowy-orange - but he’s never seen me.)

Best thing about me: I'm the only talking dog in Australia and, perhaps, the world. Of course there are other good things too.

Worst thing about me: I don’t know how to swim. I’m the only non-swimming dog in Australia and, perhaps, the world.

The town where I live: Bogusville, a country town.

Where is it? Somewhere in Australia.

Real name of my town: Sorry but I’m not telling.

Favourite thing to do: Nothing at all. When I get tired of doing nothing, I watch TV or DVDs, play games on the computer. I also listen to music and, sometimes, I read books. I love the action-adventure books about Blake Romano.

Person I hate most in the world: Aunt Jetty's dreadful sons, Willy and Billy (and Aunt Jetty isn’t too great either).

Person who hates me most in the world: Aunt Jetty’s dreadful sons, Willy and Billy. (And Aunt Jetty.)

The people I like more than anyone in the universe: My wonderful owners, Dr and Mrs Trifle - the dearest, most wonderful people on earth.

So where’s the real Selby?

Selby’s real name isn’t Selby. Even Duncan doesn’t know what it is. Or what the real name of Bogusville is. Or what the Trifles’ real names are. It’s all part of Selby’s plan to keep his secret a secret. In fact he could be your dog. Okay so your dog is a girl dog---Selby may even have lied about being a boy. Only Selby himself knows for sure.

Here’s how to tell if your dog is the real Selby: 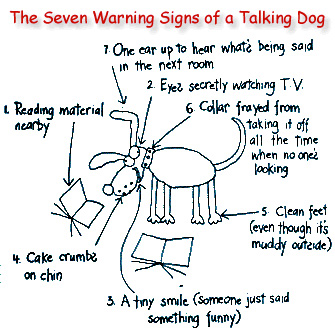 Or you could just tell him a joke and see if he laughs. 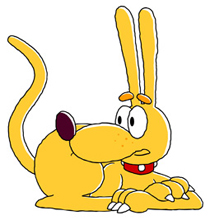 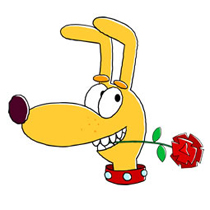